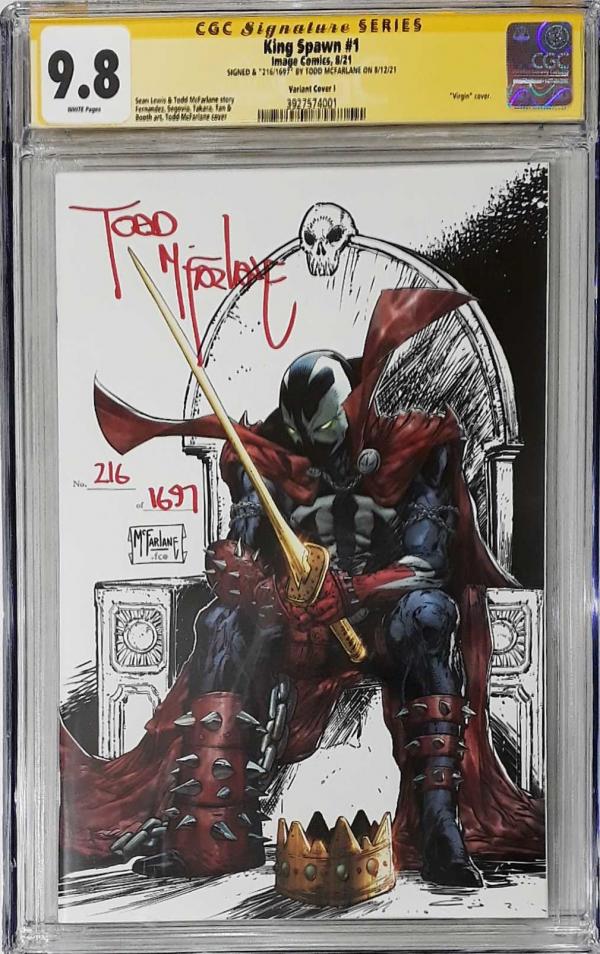 A historical NEW ongoing SPAWN series begins!The launch of this book, nearly three decades in the making, further expands the SPAWN UNIVERSE with a growing presence of Hell, Heaven, and Heroes here on Earth.A classic villain from Spawn's past has begun asserting his powers on Earth by corrupting as many souls as possible. And only Spawn knows that he even exists. Continuing the dramatic battles from SPAWN'S UNIVERSE #1, this is where it all begins!!!!!Don't miss out...the last time a new ongoing SPAWN series launched was in 1992. Todd McFarlane's King Spawn #1 1:250 retailer incentive will be the lowest print run ever released by Todd McFarlane Productions. Additionally, each book will be hand-signed by legendary Spawn creator Todd McFarlane, and each book will have its own unique number on it. This is the only time McFarlane will sign the King Spawn #1 McFarlane retailer incentive issue. This incentive cover is exclusively offered to retailers that order 250 copies of King Spawn #1. "After listening to the retailers who wanted more time and information about this new incentive, here is why this incentive book will be so special. First, each book will have its own unique sequential number on it (based on the final Final Order Cutoff total). Making each book a 'one-of-a-kind' item as no other book will have that same number!" said McFarlane, creator of Spawn and President at Image Comics. "Second, each of those books will also be signed by myself. This will mark the lowest print run I've ever offered to retailers! And I will never sign another copy of these books… meaning the total number of signed books will always be limited to this initial offering." "Third, you have my promise that I will never sign another copy of this book in the future.
Number 216 / 1697